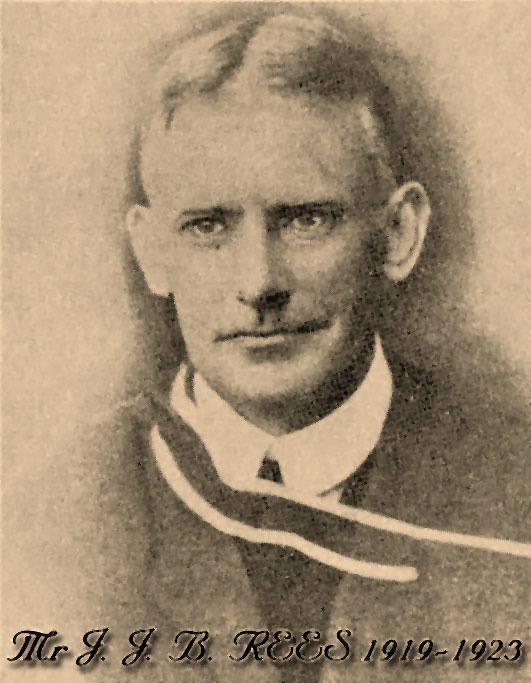 Mr Rees was born in South Wales in 1882.
He was educated there and in England and obtained his B.Sc. Degree at the London University. He was outstanding at games.

After teaching for eight years in England, he was the Senior Science Master at the Johannesburg College (later King Edward VII School) from 1909 to 1919, when he was appointed Headmaster of the Technical High School.

Mr. Rees possessed vision, courage and confidence in his ability to perform the task allotted to him. His rare smile revealed a lovable person within the often aloof and always efficient Headmaster.

He achieved much in the short time before his death in 1923.

The School opened as the Technical High School in 1919 in a wood and iron building at the Union Grounds. It was the only School of its kind for boys in South Africa, and offered a specialized Matric course with a bias towards Applied Science. The Headmaster was Mr. J.J.B Rees. Two of the original members of staff were Mr. E. Chalmers and Mr. D.B. Jones.

Towards the end of 1919 the School moved out to Forest Hill where the buildings were incomplete and the grounds were rough veld. The pupils dug out the grass, removed the worst of the bumps and played cricket and soccer on a slope.

Of the staff who were there in the next few years, the following are known to have died since the Silver Jubilee issue of “The Forestonian”- Mr. E. Chalmers, Mr. D.J. Bischoff, Mr. T. Robertson, Mr. P.V.W.Pougnet, Mr.S.S. Loubser, Mrs.O.H.M. Crowther (Mrs Watson) and Mr.H.W. Beeton. News has been heard of Mr. R.J. Campbell, who resides in Johannesburg, and Mr. J.M Parker, who lives in Hermanus, has contributed an article to this magazine.

The first School concert was held in the Oddfellow’s Hall, Turffontein, in 1923, when Mr. Robertson produced “Jemima Does her Bit”: the first Prize Giving Ceremony in 1922 with Dr. J.E. Adamson (later Sir J E Adamson), the Director of Education, as the Guest Speaker and the first Governing Body meeting took place in 1921.

Mr.T.J. Rees was appointed Headmaster after the death of Mr.J.J.B Rees in 1923.

In 1926 the Technical College was built in Eloff Street and the Technical high went out of existence. The School then became Forest High School and girls were admitted. Two of the original subjects were maintained – Mechanics and a specialized Manual Training Course, that fell way later.

The first Athletics Sports Meeting was held in 1925 and Cross Country in 1927. The Hall was built in 1928. At the official opening The Old Forestonians presented “The Tempest”. The Hall was used for many plays produced by Mrs. Watson, Miss Malaren, Miss Bowditch and Mr. Roberston, – all of whom often preformed in them, and for the excellent operettas produced and conducted by Mr. D. B. Jones. These were presented annually from 1929 to 1937. Miss Maclaren was the pianist at all the concerts and operettas.

The number of pupils at the School fluctuated with the introduction of and, later, the withdrawal of an Intermediate School in the area.

In 1929 the lower portion of the ground was leveled. The ground on both sides of the School had already been leveled and grassed and four tennis courts had been placed on the East side. The West side was later made into a girl’s hockey ground.

The Forest soccer teams were always keen and the First X1 won the Konigsberg Trophy in 1938, the year before the School switched over to rugby. Dr. Vincent Boy was a member of the team. The Old Pupils who have won colours for various sports over the fifty years are listed elsewhere in the magazine.

Mr L.D. Jones became the Headmaster in 1939 and had to overcome the difficulties created by war conditions – shortage of staff, an increase in the number of pupils, many of whom lacked parental control with their fathers in Active Service. There was a lack of adequate accommodation and an increase in extra-mural activities. The grounds were improved. A major task in those years was the raising of money for war and charitable funds.

The free book system was brought in in 1939, but from 1940 difficulty was experienced in obtaining text books. In 1941 the Junior Certificate Examination became an internal School examination.
In the same year Dr Muller formed the School Orchestra and the Young South African Concert Party, which entertained soldiers in camps and hospitals consisted mainly of Forest High scholars. 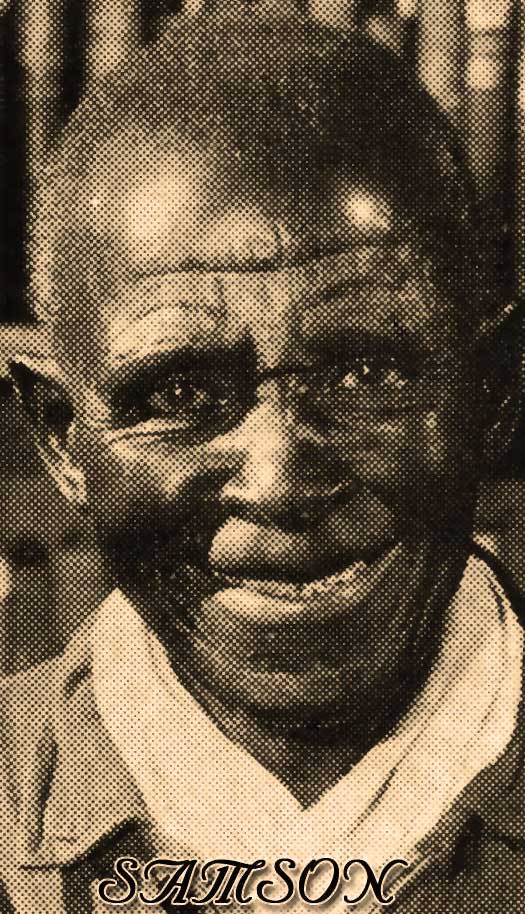 Mr Mshangonni Mathenjwa, known to us all as “Samson”, was born in Maputo, Zululand. He moved to Durban in 1906.

After leaving School he worked on fishing ships and then worked the winches on whalers. He became a loader on cargo ships and visited England, China, India, Singapore, Japan, the East Coast of Africa and Australia.

His sea career ended when he fell down a hatch and broke his shoulder, resulting in six months in hospital.

He married his first wife, Lena, in Zululand before coming to Johannesburg in 1912. After working as a domestic servant in Parkview, for Medical Research and in a shop in La Rochelle, he went into domestic service in 1917 with Mr. Chalmers, who became one of the original staff members of the Technical High School, which later became Forest High.

Mr Chalmers brought Samson to work at the School when it opened in 1919. He alone has seen every Headmaster, member of staff and pupil who has been at the School over a period of fifty years.

The staff and pupils collected for him when he had served the School for forty years and Mr Fowler, the then caretaker, assisted him to obtain a house at Dlamini, Kliptown. The money was used to pay the deposit.

Over the years Samson’s duties have been varied. For years, when there was no caretaker, he was the janitor. He controlled the African staff and ordered the cleaning materials and equipment. After every function he organized the clearing up and, when the staff arrived the following morning, there were no traces of the previous night’s festivities.

Every day, until the electric bell was installed, Samson rang the hand bell punctually, in spite of the efforts of the pupils to delay him at the end of the breaks.

Latterly he has served the staff with tea – quite a formidable task in this School. His long service is beginning to tell on him and his health has not been good.

Samson has always been cheerful and courteous and a willing worker – never late and never absent without good reason. His record of fifty years of service is an outstanding one. We appreciate everything he has done for us.